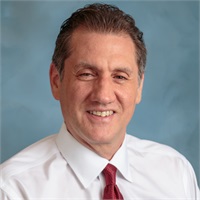 Daniel J. Friedman co-founded Wealth Management Group of North America, LLC with Brian P. Beck in 1995. Today, Daniel serves as CEO of the firm. His financial blog “Don’t Know Don’t Care” has been featured on NerdWallet’s “Advisor Voices” and has been nationally syndicated by over a dozen different media outlets.

Daniel has appeared in many publications, including The Hartford Courant, The Herald Press, The Bristol Press, and West Hartford News. He is often interviewed on many local TV stations, including Fox CT 61. He characteristically delivers his opinions in an interesting and humorous manner and always has a fun and unique take. If you ask him, you’ll find out.

Daniel was born in Brooklyn, NY and moved to West Hartford, Connecticut with his family as an infant. After receiving a Bachelor of Arts in History from Denison University in Granville, Ohio in 1986, he moved back to Connecticut.

Although now working in the financial industry, Daniel continues to enjoy reading historical biographies. He lives in West Hartford today with his three sons—Maxwell, Jordan, and Shea—along with Rumer, his 150-pound English Mastiff.

Daniel is active in the West Hartford community and has an affinity for education and sports. He is a big supporter of student athletes, specifically those at the University of Hartford and Hall High, where he graduated in 1982.

Through Daniel’s work, WMGNA has developed an active relationship with the UHA baseball team. Together, the two organizations have raised thousands of dollars for the Miracle League of Connecticut.

In addition to the baseball team, Daniel and WMGNA have a robust partnership with UHA’s Barney School of Business. WMGNA provides internships, hosts Corporate Day at the firm’s office, and participates in the college’s Spotlight sessions.

Daniel is also an active supporter of local government. He received an appointment in 2013 by Governor Dannel Malloy to serve on Connecticut’s State Insurance and Risk Management Board.

While he’s not at the office, Daniel enjoys traveling and spending time at the family compound at Groton Long Point. He firmly believes in the concept of a sound mind in sound body and works out daily at the gym he built in his garage—aptly named "Opponents". He is a member both of the New York Sports Club and Red Sox Nation. His love of baseball extends to the Hartford Yard Goats. WMGNA always has a big turnout for their annual baseball game and picnic. Daniel also captains the WMGNA race team at the Blue Back Mitten Run.